A clear, sunny day in Edinburgh saw thousands of students, guests and families through the gates of BT Murrayfield to enjoy a spectacular showcase of student rugby for this year’s Royal Bank of Scotland Scottish Varsity Matches. Contested between St Andrew’s University and the University of Edinburgh, is believed to have grown from the oldest varsity in the world, with the first matches between Edinburgh University RFC and University of St Andrews RFC dating back to the 1860s. The atmosphere in the stadium was palpable with plenty for both sides to cheer on throughout both matches.

Although the teams from Edinburgh claimed decisive victories in both the men’s and women’s matches but the real winner was student sport, with the crowd of just under 9600, believed to make the Varsity Matches the highest attended sporting event in Scotland of the day. 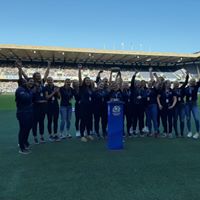 The University of Edinburgh continued their unbeaten run in the women’s fixture with a dominant 52-0 win. There were a number of notable performances on the day, but the star of the show was eventual Keri Holdsworth Player of the Match Winner Meryl Smith.

The Women’s Player of the Match is awarded in memory of Keri Holdsworth, a Scotland Women’s International with 15 caps who joined the University of Edinburgh’s FASIC Sports Medicine Clinic in 2011 and worked closely with their performance sport programme but who sadly passed away at the age of 36 following a car accident in 2014.

Smith said “The first-half was really good. We did exactly what we set to do – hit up in the middle and play the ball into the wide channels. It took us a while to get going in the second-half, but we eventually pulled away and it was really pleasing to see that attacking brand of rugby that we really try to play at Edinburgh.”

Edinburgh went into half time 40 – 0 ahead with scores tries from Sally Stott (2) Ciara McCulloch, Evie Gallagher, and of course Meryl Smith who claimed 2 tries and 5 conversions

The second half was a closer contest with Sarah Denholm and Laura Keay scoring tries and Captain Rachel Law adding a conversion. 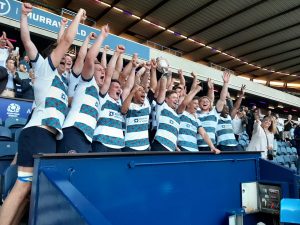 The University of Edinburgh men claimed a third successive victory over St Andrews running in nine tries to secure a 62 – 0 win. There were a number of strong performers on the day but the highlight was that of Steven Sims Player of the Match, James Small-Edwards who scored a hat-trick of tries and was the stand out performer throughout the match.

He said: “It was brilliant. I think we implemented our game plan really well. We kept on script and we didn’t divert from what we were told to do.
“We stayed really disciplined. I think our kicking game, especially early on, carried us through it and St Andrews then struggled to get out of their own half.”

The Steven Sims award is in honour of Steven, who was the heartbeat of the University of St Andrews RFC during his time at the club in which he filled committee roles of Secretary, Treasurer, Club Captain and, in his final year, 1XV Captain, who passed away unexpectedly after taking ill in 2012, aged 23.

With Edinburgh leading 24 – 0 at half time with scores from Suwi Chibale, James Nelson, James Small-Edwards and Harry Hitchens and conversions from George Wallington.

The break gave the St Andrews team time to regroup however it was Edinburgh that shot out of the blocks to continue their dominance. Further tries from Small-Edwards, Henry Weir, Harry Wells, Zak Redgrave and conversions from Wallington,Causer and Wells secured a 62-0 victory.

The annual Scottish Varsity Matches celebrate the dedication, exhilaration and huge potential of student sport in Scotland. It displays the best of student experience, for the players, supporters, and volunteers, who find a sense of belonging in their University through sport.