While continuing coronavirus restrictions meant the fixture was moved from its usual home at BT Murrayfield to University Park in St Andrews, this did little to dampen the significance of the fixture in the hearts and minds of the respective student populations.

The last fixture, held in 2019, saw a record 62-0 victory for Edinburgh which was, of course, a delight for Edinburgh supporters. For the St Andrews loyalists it constituted a significant humiliation that many swore should never be repeated. 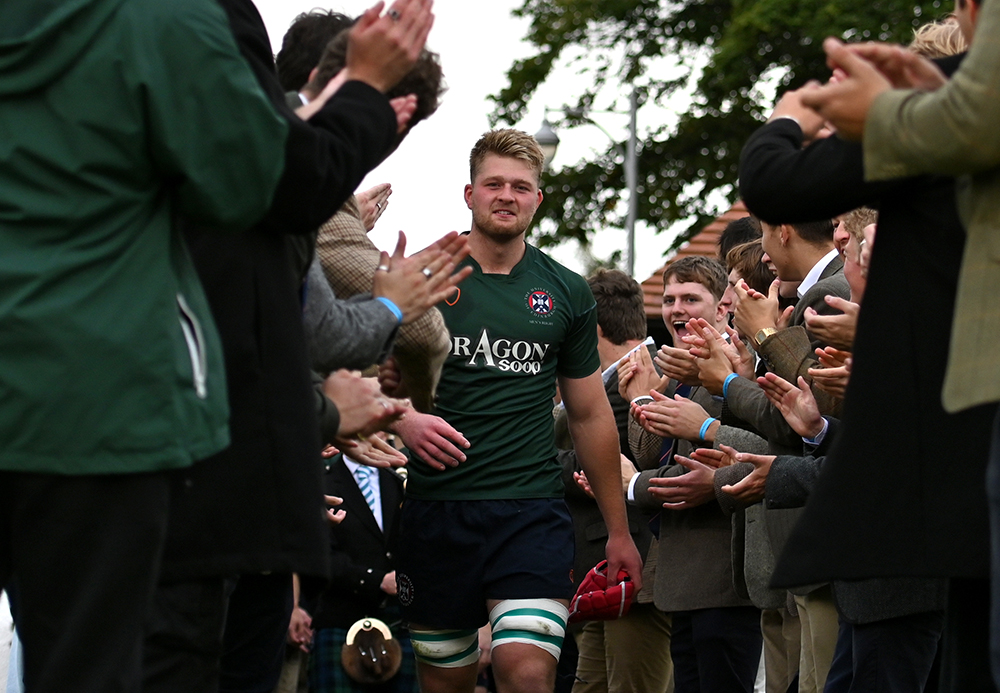 If this was not enough to motivate the Saints, there was also the fact that the historical record stood at five Edinburgh victories to St Andrews’ four (since the Scottish Varsity was resurrected in 2011); victory in 2021 would see, quite literally, old scores settled.

The Saints’ recent results, moreover, suggested that they were unlikely to be toothless this time around: pre-season had seen them slay not only Glasgow University, Strathclyde University and Durham University, but also emerge as victors in the Fife Cup.

To write off Edinburgh’s desire would, however, be a grave error as their own streak of pre-season form, which included a 44-17 win over Manchester Metropolitan and a 36-19 victory over Durham University, meant squad confidence was undoubtably running high. 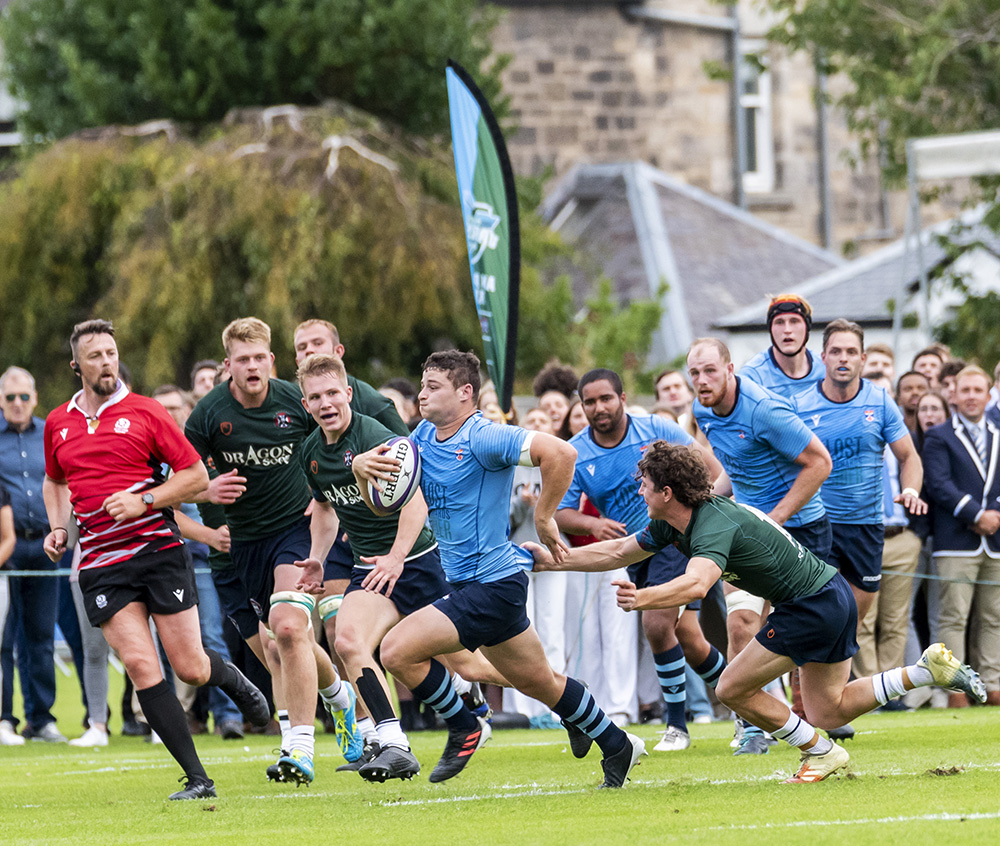 With roughly one thousand spectators gathered round the pristine turf of University Park in fine weather, the teams emerged from the changing rooms through a tunnel of fans to the rousing sound of Highland Cathedral on the pipes. The stage was set for a fiercely fought spectacle.

It is perhaps unsurprising given the occasion that the opening minutes were a relatively cagey affair, with both teams making a few unforced errors at the line out and producing a handful of handling errors in open play. Inside the first ten minutes there were early signs, however, of an effective Saints set piece and flashes of crisp distribution across the backline. There were also flickers of the threat from the St Andrews outside centre Gerard Pieterse whose crushing defensive hits started within seconds of the first whistle.

It was the Edinburgh men though who were looking more likely in the opening exchanges. The experience of three-time Varsity capped winger Harry Hitchens shone as brightly as his blonde mullet as his attacking kicking sent the Saints back peddling, while a powerful lineout maul looked a likely source to trouble the scoreboard. 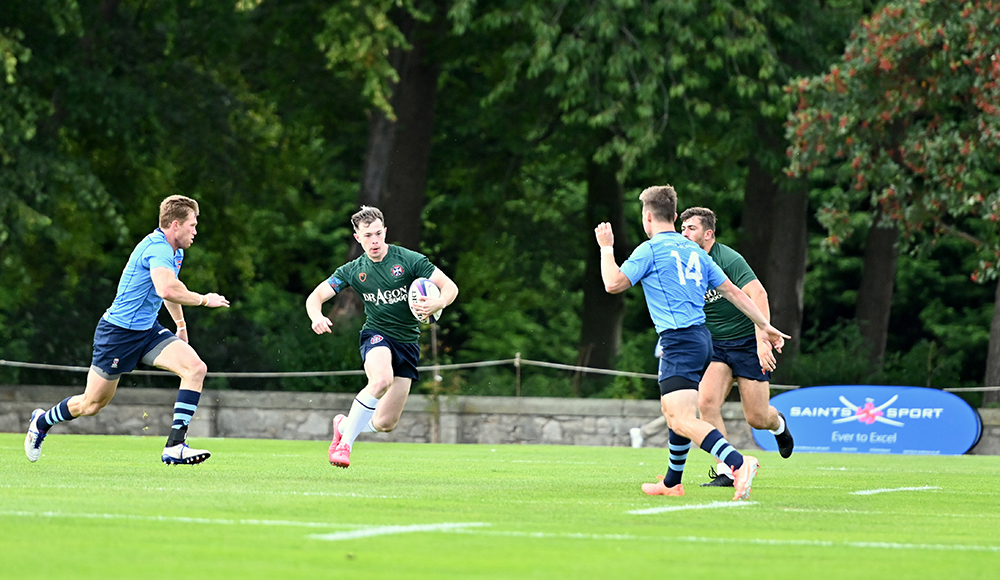 Further handling errors from St Andrews in combination with accurate touch kicking from full-back Ben Heber led to the first score in the form of a driving maul in the left corner. Heber was unable to add the extras as his kick rebounded off the left upright; it was a 0-5 lead to Edinburgh after 20 minutes with hooker Ryan Cullen the scorer. At this point it was the away supporters that were in strong voice, with the St Andrews supporters having been temporarily silenced with the score coming right next to their main stronghold.

The early score did little to phase the men in sky blue. In fact, it seemed to settle the nerves and act as a catalyst for a period of sustained pressure. Both the lineout and scrum were increasingly dominated by the home side. Although challenged well by Edinburgh first year Enzo Croy, Liam Kerr was establishing himself as a safe pair of hands. Such proficiency at the set piece allowed the Saints a platform from which to deploy their hard running back row; the likes of John Paterson and Liam Greenhalgh were starting to find gaps and induce sustained momentum. Eventually these factors combined for a well-deserved Saints score just after the half hour mark. 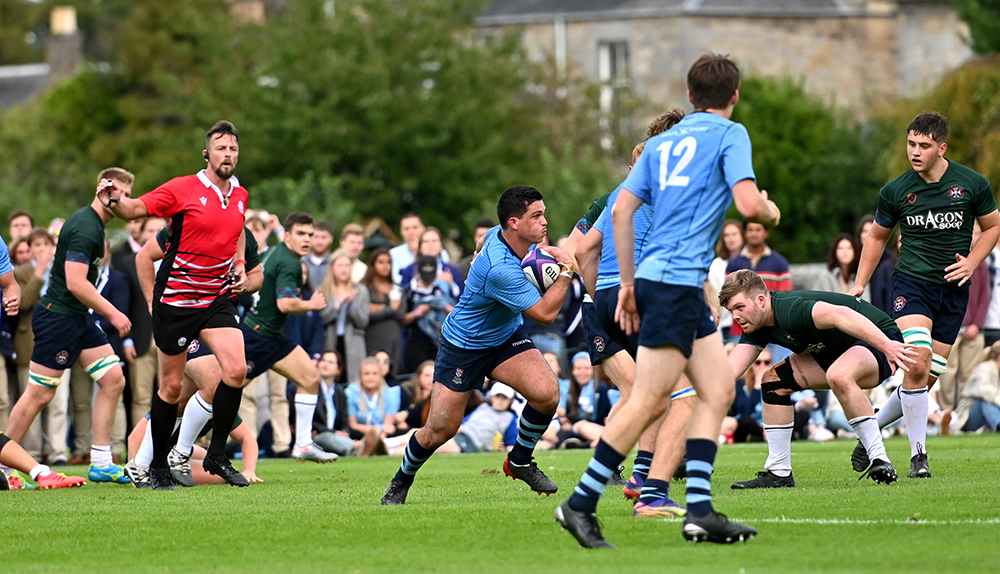 A monumental shove from varsity returner Sam Wright and postgraduate Devon Arendse saw an Edinburgh put in on the five-metre line turned over; a few phases of direct running from the Saints tight five soon resulted in hooker Josh Van Vuuren cross the whitewash to bring the scores level.

The remaining minutes of the first half saw continuing ascendancy from the home side with their back line starting to show further promise although notably without any end product as handling errors persisted. On the brink of half time the St Andrews crowd were in high spirits as the Saints forward pack continued to bust tackles. Further strong carrying from Greenhalgh and South African compatriot Bryon Bowes eventually forced a penalty offense from Edinburgh within kicking distance. As Campbell Murray’s attempt rebounded off the upright and the whistle sounded for half time the Saints would have felt they were unfortunate to not go in with a slim lead.

Much of the same continued immediately after the break. An effective line out maul was followed by archetypal carries from Paterson and Bowes, eventually taking St Andrews to within striking distance of the line. A high pass saw an airborne Saints man taken out; this dangerous tackle was met with a penalty alone, but at a distance that Murray was never going to miss. The Saints took the lead for the first time. 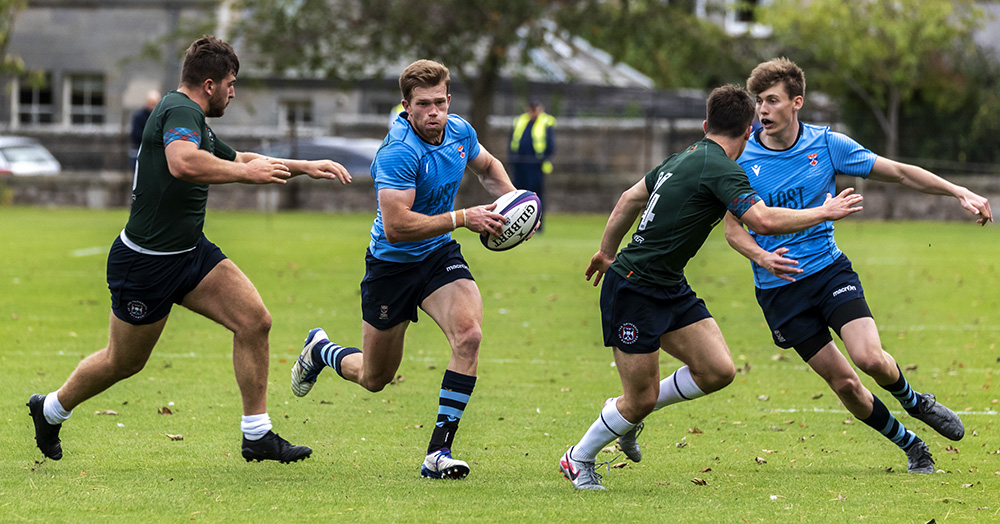 The Edinburgh half time replacements, however, were now starting to find their feet. Stand-off Lachlan Kelly was looking sharp with the ball in hand and testing the Saints back three with good targeting kicking. Pressure from the men in green was relieved with effective box kicking from Dundre Maritz, as well as continued muscle at scrum time. A sustained period of back and forth was broken only by a moment of brilliance from the Saints backs. Yet another hard carry from Paterson saw the home team break past the 22-metre line. Centre Andrew Cadzow then received the ball deep from scrum-half Maritz, producing a well-timed step to the outside where he found half a yard of space to unleash Brodie Wells. A sharp ball inside from Wells allowed Pieterse to power over the line to give the Saints a commanding lead with 20 minutes to go.

Edinburgh’s resolve though was far from broken and the following 15 minutes saw them on the front foot. Kelly was continuing to kick the ball adeptly, while Croy was showing himself as a strong adversary at the lineout and in defence. This said, the Saints were yet again successful in breaking the green offensive flow through the front row duo of Wright and Arendse. At the 70-minute mark another Edinburgh attacking kick, this time from winger Fraser Jones, almost threw the light blue jerseys, but was recovered well by a back three who seemed composed throughout.

There was time for one more St Andrews penalty to add to home festivities. It was Steven Sim’s Man of the Match winner Campbell Murray who added the final points following typical strong carries from the tireless St Andrews pack.

So, after a closely fought affair, it was St Andrews captain Isaac Stables who hoisted the Scottish Varsity Cup with characteristic gusto after the final whistle. The final score of 18-5 doing justice to both sides and restoring the record to five wins a piece for the respective universities.