Teams from the University of Edinburgh and University of St Andrews announced their line-ups for the 2019 Royal Bank of Scotland Scottish Varsity Matches earlier today.

Steeped in history, the fixture features talented student athletes and is believed to be the oldest Varsity match in the world. Both games take place on the international pitch at BT Murrayfield this Saturday with the women’s game kicking off at 3pm and the men’s at 4.15pm

The ancient rivalry between Scotland’s two oldest university rugby clubs has seen in excess of 10,000 fans flock to the stands in recent years with a bumper crowd expected again this year.

A host of sporting talent

All four teams feature an array of sporting talent

The University of Edinburgh men’s team features a number of Varsity “veterans” but also a number of debutantes including Henry Weir and Will Cooke who were due to play in the 2018 match but were forced out due to injury.

“We are delighted to have the opportunity to play at BT Murrayfield. The whole team are looking forward to the unique challenge the Varsity Match brings.”

‘After mounting a come back last year, we are looking to finish the job. It’s going to be a hard game, but we’ve had a good pre-season and we’re excited for the challenge.’ 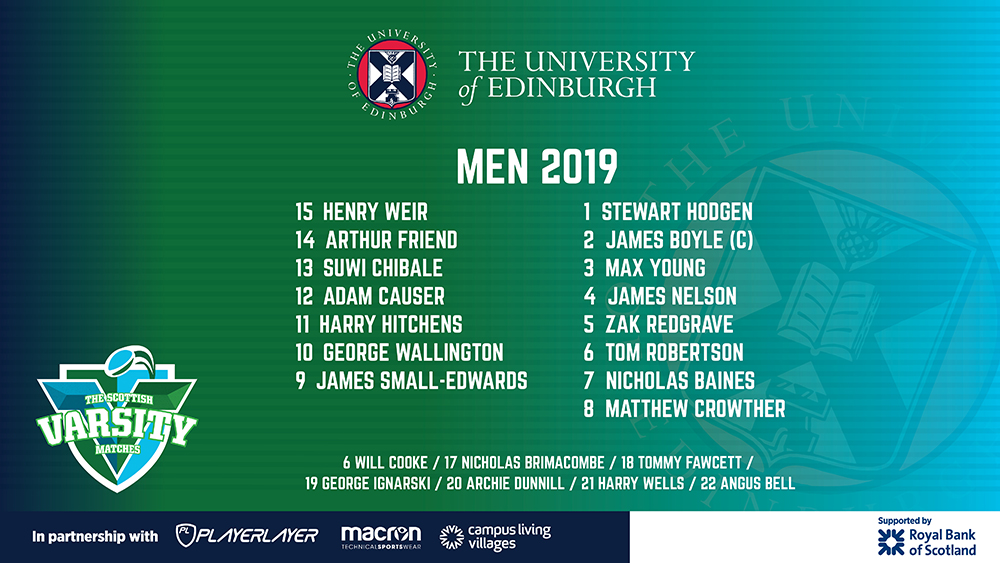 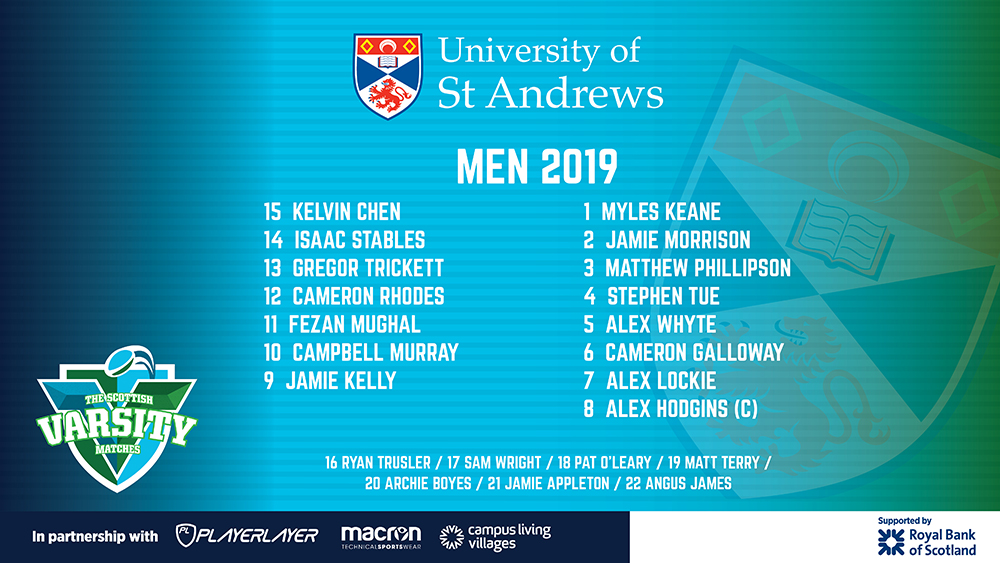 The Edinburgh Women’s team will feature several International players including Captain Rachel Law, a 4thyear Vet student who is looking to add to previous Varsity and BUCS Championship success. The team will also feature 10 team debutants, demonstrating the growing strength and popularity of women’s rugby in Scotland.

“Varsity is a fantastic opportunity to showcase EULRFC. With record crowds it gives us a platform to show what women’s student rugby is really like. It’s very special running out onto Murrayfield and the atmosphere is amazing.”

Similar to the men’s squad St Andrews Women also display a good mix of youth and experience. Captain Beth Tappenden has been a Varsity regular over recent years while Emily Jones starts at fly half having started last years match at scrum half. This change sees post grad and former Cambridge Blue Sian McGuinness move to inside centre. Up front Kaitie Golub and Scarlett Neill start in the pack for the first time while Iona Ward and Amy Horsey make their debuts at scrum half and right wing respectively.

The Varsity match is the showcase event to promote women’s rugby across all levels of the student game. It continues to inspire players to be involved and perform at their best on the big stage.

“Varsity is a brilliant chance to showcase a sport that more women and girls are being encouraged to play. All teams have the opportunity to display the camaraderie and sense of family it brings to our lives.” 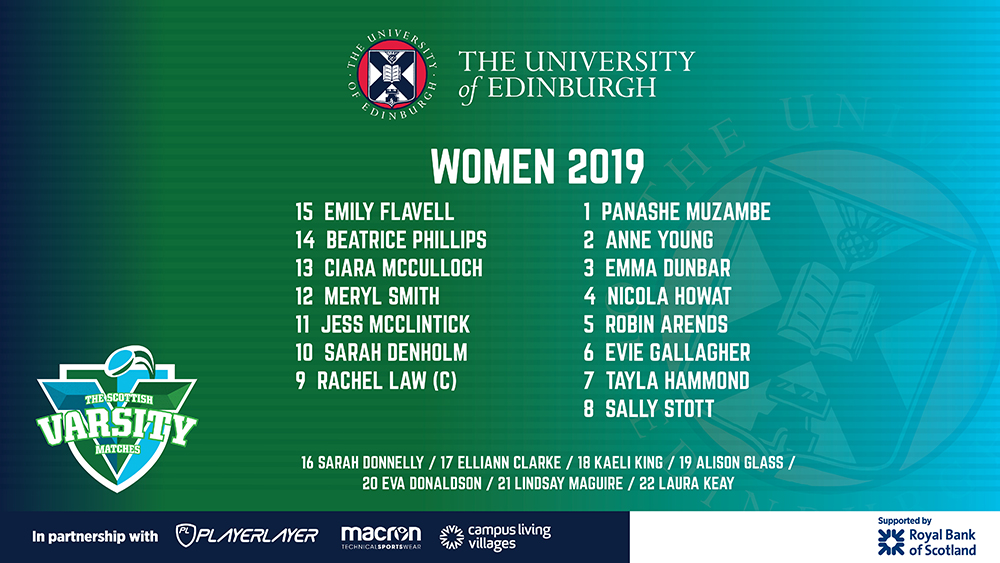 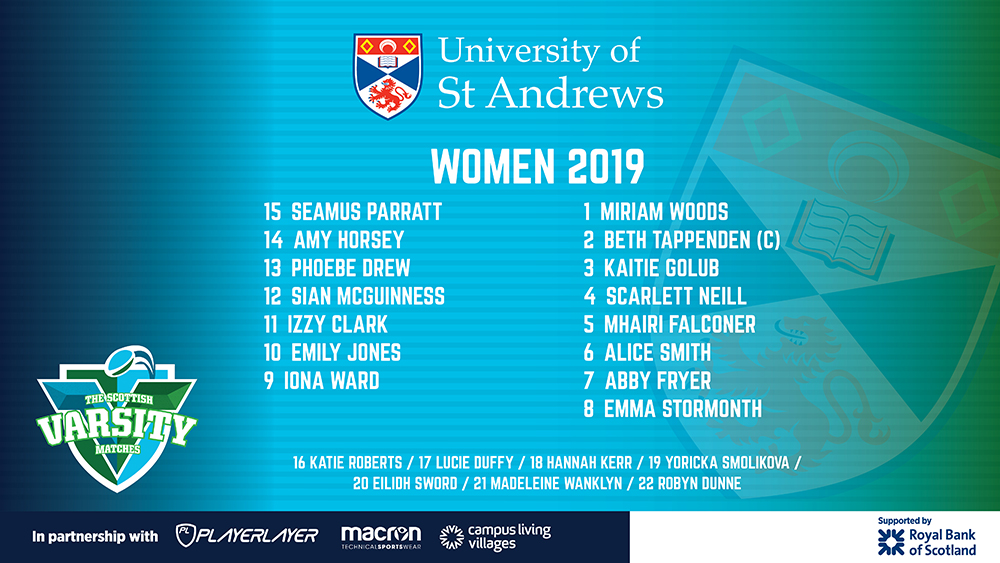 Tickets for the match are available now from https://www.scottishrugby.org/tickets-and-events/events/scottish-varsity

Tickets are available for £5 for students and £10 for adults with U16s going FREE in the new family stand until Friday 20th September.

Tickets purchased on the day will be £10 for students and £15 for adults.

The event is supported by Royal Bank of Scotland and is also run in partnership with Scottish Rugby, Campus Living Villages, Macron and PlayerLayer.

Find out more about the event